I Dreamed A Dream of Films Gone By 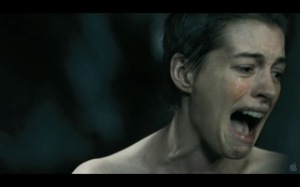 Just another day on the set of Les Miserables for Oscar winner Anne Hathaway.

Very few genres are as bi-polar as the movie musical.  With few exceptions, films in this category are either awful or amazing, with very little room in the middle.  For every Chicago, West Side Story or Sound of Music, you get The Phantom of the Opera, the film adaptation of Rent or even worse (shudder) Across the Universe.  Despite the best intentions of talented artists and filmmakers, it’s a tough task to replicate stage productions on the silver screen.  The biggest problem is the difference between film and stage acting.  Stage musicals require actors to be theater filling big, filmmaking is about small, controlled intensity.  Get the balance wrong, and your version of Miss Saigon is going to play loud and overpowering.  Despite some of the expected pitfalls of the source material, Tom Hooper’s film adaptation of the Broadway sensation avoids many of these issues and the result is a satisfying success.  This isn’t Catherine Zeta-Jones in thigh highs, but Les Miserables is a daring and stirring attempt to put a Broadway phenomenon on the silver screen.

Right off the bat, your enjoyment of Les Mis will largely depend on your tolerance for Broadway style music.  Like the play, the film is completely sung from beginning to end, so my recommendation for novices would be to check out some of the tunes online.  If you can’t get though three songs without switching to videos of talking cats, pick another movie for your Friday night.  Another stumbling block is the melodramatic storyline.  Encapsulating two decades of a criminal turned local leader (Hugh Jackman), the French captain looking to put him away (Russell Crowe) and a working girl turned concubine (Anne Hathaway), the subject matter is dour.  Face it, friends.  The movie’s title translates to, “The Miserable” and the poster features the saddest looking girl known to mankind.  It’s no spoiler to say things aren’t going to be peaches and cream for the movie’s protagonists.  Unless you’re courting a manic depressive or Grumpy Bear, this is not a date movie. 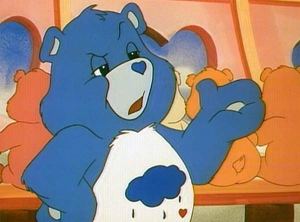 Of course, it didn’t become a worldwide sensation for nothing.  The music is achingly beautiful and the actors charged with delivering the tunes run from passable to phenomenal.  Most musicals rely on studio overdubs for the final product, but Hooper took the brave route of using the set recordings for the final audio take.  What you lose in vocal perfection, you gain in genuine performances and for the most part, the gamble works out.  Anne Hathaway’s performance of the haunting I Dreamed A Dream is a cinematic highlight of the year, proof positive of the director’s decision.  Hooper also injects the film with energy through sweeping camera work, and an eye for good pacing.  Rather than fill the screen with grand theater style sets, Hooper’s Les Miserables focuses on the actors and the great performances delivered by the cast.

Without that, this movie would have sunk under the weight of its own melodrama and still may for many film fans.  Like I said in the opening, this is not for everyone.  The story is dour to the point of depressing, Russell Crowe simply can’t handle the vocal task of Schonberg’ sweeping score and it’s Broadway.  Some viewers lack the stomach for the medium and that’s just fine.  Those who like a good weepy soap opera backed with astounding music will find plenty to enjoy in the latest film version of Les Miserables.  The movie contains some outstanding vocal performances, lively camera work and maintains much of the power from original stage presentation.  It’s a rough road to 19th century Paris, but when it’s executed with this amount of skill and care, it all works out in the end.  Grumpy Bear tested, film fan approved.

Jersey based and New York bred, Bill Tucker is an author of film reviews, short fiction and articles for variety of sites and subjects. He currently blogs for The Austinot (Austin lifestyle), the Entertainment Weekly Blogging Community (TV and film) and SkirmishFrogs.com (retro gaming). He's also contributed articles to Texas Highways magazine. His favorite pastimes include craft beer snobbery, gaming and annoying his friends with random quotes from The King of Comedy. You can check out all of his literary naughty bits at www.thesurrealityproject.com END_OF_DOCUMENT_TOKEN_TO_BE_REPLACED
This entry was posted on Monday, March 18th, 2013 at 11:37 pm and posted in Movie Reviews. You can follow any responses to this entry through the RSS 2.0 feed.
« The Lorax (2012)
Insta-Piece – Gliding Towards Mystery »