That’s A Lot of Fish Fun!

That about says it all. All we should reasonably expect from the King of All Monsters is screaming citizens, smashing buildings and monsters beating the butt out of each other. The stories should be silly, the acting should be campy and the action should be entertaining. These aren’t social commentaries or dramas about the struggles of 1920’s Polish immigrants (teaser for a future review). It took fifteen years for the world to wash the taste of Roland Emmerich’s 1998 Godzilla from their mouths and the 2014 version is the delicious meal we’ve all been waiting for. Forget Matthew Broderick, piles of fish and screaming raptor style monster babies. Godzilla 2014 is a film made by fans, for fans and delivers almost everything we crave from an entertaining creature feature.

Godzilla sets things up during the opening credits in 1954 where we witness nuclear tests creating an ominous creature. We then fast forward to 1999 as a Japanese power plant discovers a bit of shaking where there shouldn’t be. Dr. Joe Brody (Bryan Cranston) sends his wife to investigate the strange rumblings and in a sudden radiation breech, loses the love of his life. Fifteen years later, Joe’s son Ford has come home from a tour of duty to his wife (Elizabeth Olsen) and son. Ready to settle down to a comfortable civilian life, things get twisted as his unhinged dad jumps back into his life. Obsessed with circumstances of the tragic death of his wife alone, Joe reluctantly joins his pop in the research of another power plant experiencing more of those familiar rumblings.

And then Godzilla appears and bedlam ensues. The End.

Snide comment aside, the film makes a strong attempt to provide a sensible backstory to the awaiting carnage. For the most past, the cast does little more than stare wide eyed into cameras and run from green screens, but they all pull it off with believability. There’s good variation in the casting, from Bryan Cranston’s over the top aging scientist to Ken Watanabe’s brooding nuclear plant director. The main actors, Aaron Taylor-Johnson and Elizabeth Olsen, fade nicely into the swirling action and when they try to emote, do a respectable job at it. Despite a story full of cliché’s and hacky plot points, the performances actually compliment the cheesy premise, providing a solid foundation for the fun. 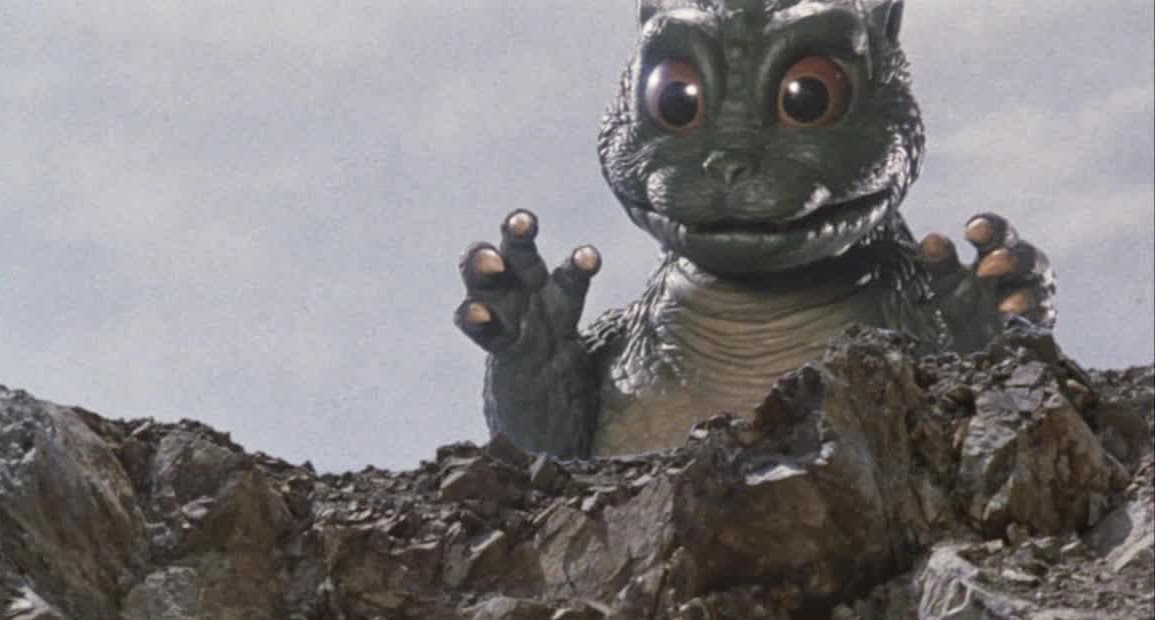 Much to everyone’s dismay, Little Godzilla does not an appearance in Godzilla 2014. Sorry to disappoint. (image: antagonie.blogspot.com)

Naturally, action is what rules the day and Godzilla delivers some of the best rampage I’ve seen this year. Despite an overreliance on CGI, the stomping monsters and crumbling buildings have a classic feel to them. No crazy quick cuts, no maddening shaky cam, just solidly shot and well paced set pieces of mass destruction. It’s was a nice change of pace to sit and watch terror be inflicted without trying to guess what’s happening.

That said and at the risk of sounding like the cranky old men from The Muppet Show, I’d love to see more practical effects compliment the computer. One of my minor quibbles is a lack of monster fighting and I can’t help but wonder if a heavy effects budget limited the amount of creature brawls. I’m not saying we need to go back to guys smashing miniatures in rubber suits but some solid variety would have been nice.

Longtime fans will also find a lot to love thanks to a number of classic series Easter eggs and subtle references, a great change of pace from other reboots who wield nostalgia like a sledgehammer. The enemy monsters, called MUTO’s, look great and the main attraction has a classically cool feel with subtle modern touches. If Godzilla 2000 looked like a rejected T-Rex idea from Jurassic Park, the 2014 monster will make you a believer of modern updates to classic creatures.

The King of All Monsters has been mashing municipalities for over a half century and has traveled from Japan, to New York to the farthest reaches of space. The quintessential model for modern day camp, the franchise has died, resurfaced and perished again. With its latest reincarnation, Godzilla reminds us it’s OK to have loud, raucous fun so long as the chaos is crafted with care and skill. One of the better times you’ll have in theaters this summer.

Jersey based and New York bred, Bill Tucker is an author of film reviews, short fiction and articles for variety of sites and subjects. He currently blogs for The Austinot (Austin lifestyle), the Entertainment Weekly Blogging Community (TV and film) and SkirmishFrogs.com (retro gaming). He's also contributed articles to Texas Highways magazine. His favorite pastimes include craft beer snobbery, gaming and annoying his friends with random quotes from The King of Comedy. You can check out all of his literary naughty bits at www.thesurrealityproject.com END_OF_DOCUMENT_TOKEN_TO_BE_REPLACED
This entry was posted on Friday, June 6th, 2014 at 5:56 pm and posted in Movie Reviews. You can follow any responses to this entry through the RSS 2.0 feed.
« Only Lovers Left Alive (2014)
The Immigrant (2014) »