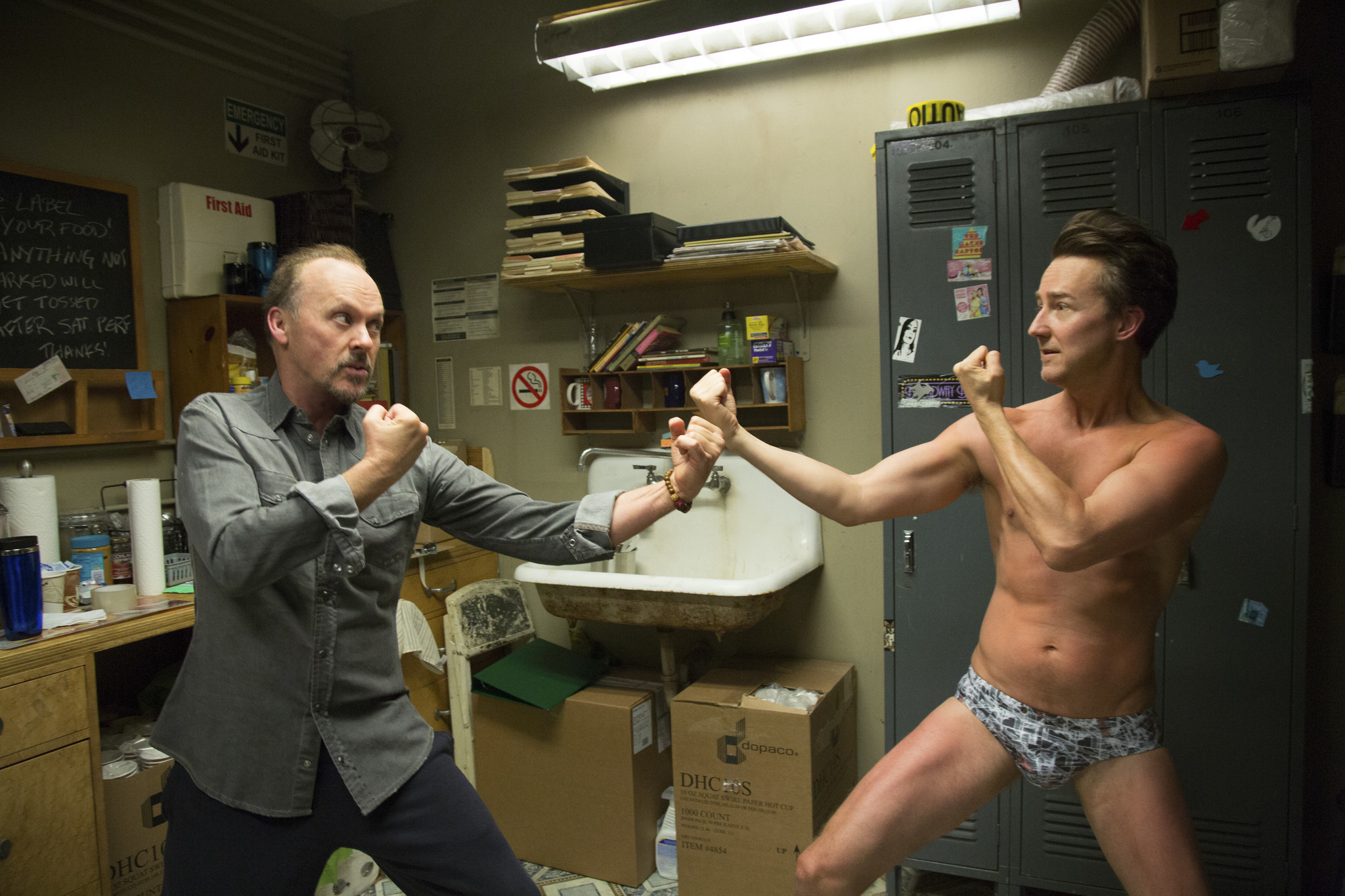 If this image doesn’t make you want to see Birdman, nothing will. (image: latimes.com)

The Alamo Drafthouse was packed the evening I screened Michael Keaton’s Birdman. The lines were long and the bar was jamming. A weekend energy pulsed through a random Tuesday night. In exchange for free tickets, the theater had one simple request. Afterwards, tweet a three word review with the Birdman hashtag. The above was my submission.

While the newest film from director Alejandro González Iñárritu (21 Grams, Babel) should give Keaton the same career resurgence Tarantino’s classic had on John Travolta, I just thought of a better phrase. Something that sums up one of the best movies I’ve seen this year.

“Keaton IS Birdman.” Emphasis on the is.

Michael Keaton doesn’t just shine in his first major live action role since 1997’s Jackie Brown. He explodes off the screen in a flash of blinding light. The movie equivalent to an Andy Warhol painting, Birdman is high art with a pop sensibility. It’s an eye catching winner.

Michael Keaton plays Riggan Thomson, a washed up action movie star struggling for one last gasp at artistic relevance. He’s written, directed and starring in a new Broadway play that has disaster written all over it. His daughter / assistant (Emma Stone) is embarrassed by him, his co-star is a preening peacock (Edward Norton) and his producer (Zach Galifianakis) is barely holding things together. Making an arty adaptation of a Raymond Carver story is hard enough. Doing so with the weight of your former success constantly nipping at your heels is downright impossible.

Experiencing Michael Keaton in the role of a has-been superhero is like watching an exaggerated true life story. Reminiscent of Mickey Rourke in 2008’s The Wrestler, Keaton has lived the life of his character which gives the role a deep sense of authenticity. With excellent comedic timing and a knack for making everyone around him better, Keaton is in rare form. While the more cynical may toss it aside as “playing himself”, I haven’t seen him this invested in a role since Beetlejuice.

CAN I GET A PICTURE???? Michael Keaton dodges his admirers in Birdman. (image: filmjunkee.com)

In the director’s chair, Iñárritu orchestrates the story with an award worthy touch. Framed like a classic three act play, the entire film looks like it was done in one, long take. There’s no visible editing until the very end. This gives the story a dreamlike, surreal quality. The cinematography honestly captures New York’s theater district and paints a beautiful portrait for the cast to work against.

And as the gears in this carefully crafted Swiss watch, the cast has plenty of lifting to do. Edward Norton is electric as Keaton’s co-star while Emma Stone gives the potentially clichéd role of Thomson’s abandoned daughter intensity. One startling scene where she dumps her emotional Pandora’s box on her dad just might nab her an Oscar nomination.

Keeping in trend with this year’s crop of award hopefuls, Birdman is also subversively funny. The story, while becoming a touch obvious as it rolls towards the end, is rich in themes and hidden bits to discover. Iñárritu also fills the frame with sublime surrealism. From Keaton’s levitating to the costumed bird who whispers the truth in his ear, Thomson’s mental state and conflict is illustrated in a very visual way. Even the spare jazz drumming soundtrack gives the movie a thundering heart.

Aging gracefully requires constant adaptation. By spreading his wings and pouring every frustration into a centerpiece role, Michael Keaton has become a phoenix reborn. Add to the mix a distinctive visual style, an electric supporting cast and sharp humor, Iñárritu has finally created the classic he was born and bred to make. Don’t wait for a free screening, a Netflix stream or a spur of the moment rental from Redbox. Birdman is a movie that begs to be seen as soon as humanly possible.

Jersey based and New York bred, Bill Tucker is an author of film reviews, short fiction and articles for variety of sites and subjects. He currently blogs for The Austinot (Austin lifestyle), the Entertainment Weekly Blogging Community (TV and film) and SkirmishFrogs.com (retro gaming). He's also contributed articles to Texas Highways magazine. His favorite pastimes include craft beer snobbery, gaming and annoying his friends with random quotes from The King of Comedy. You can check out all of his literary naughty bits at www.thesurrealityproject.com END_OF_DOCUMENT_TOKEN_TO_BE_REPLACED
This entry was posted on Friday, October 24th, 2014 at 11:38 pm and tagged with Birdman, Edward Norton, Emma Stone, Inarritu, Michael Keaton and posted in Sightings and Such. You can follow any responses to this entry through the RSS 2.0 feed.
« See For Yourself: The Highball Is Back
Idol – A Very Short Story »